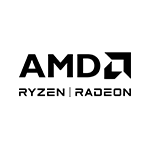 Fully realize your creative vision with the most powerful 24-core desktop processor in the world.1,2

Improved energy efficiency, higher clock speeds, and more cores than ever before.

The Simple and Powerful Overclocking Utility for AMD Ryzen™ processors.

Based on the latest Zen 2 architecture and manufactured using 7 nm processing technology, the 3rd generation Ryzen Threadripper is a High-End Desktop (HEDT) processor engineered to overwhelm your most demanding workloads. Whether it’s rendering, streaming, compiling, encoding, working, and playing, you can do it all, all at the same time. The support for quad-channel memory and PCIe 4.0 offers gigantic bandwidth, and NVMe RAID capability pushes the already amazing storage performance to a new height.

The AMD Ryzen Threadripper 3960X boasts 24 cores and provides an astonishing 48 threads of simultaneous multi-processing power, while 140MB of combined cache and vast I/O from the enthusiast-grade AMD TRX40 platform work together to deliver incredibly performance.

Setting the Bar for High Performance

The new AMD TRX40 motherboards feature the debut of advanced PCIe 4.0 connectivity on high-end desktop, delivering more bandwidth for creators than ever before.

Combine up to six NVMe disks in for superlative speed or rock-solid redundancy with Ryzen Threadripper processors. Want even more? Get double the bandwidth with PCIe 4.0, exclusively for high-end desktop on AMD TRX40 motherboards.

Every AMD Ryzen processor is multiplier-unlocked from the factory, so you can personalize performance to your taste. AMD provides the AMD Ryzen Master utility to access this powerful advantage.2,3

If you're looking for an AMD processor in Kolkata or in India, the best place to buy one is Supreme IT Mall. They have a wide selection of AMD Ryzen desktop processors, so you're sure to find the perfect one for your needs. Plus, their prices are unbeatable. So don't wait any longer, head to Supreme IT Mall and pick up your AMD Ryzen desktop processor today!

AMD processors are available at a range of speeds and prices, allowing you to find the ideal solution for your needs. AMD is an excellent choice for a powerful and dependable processor.